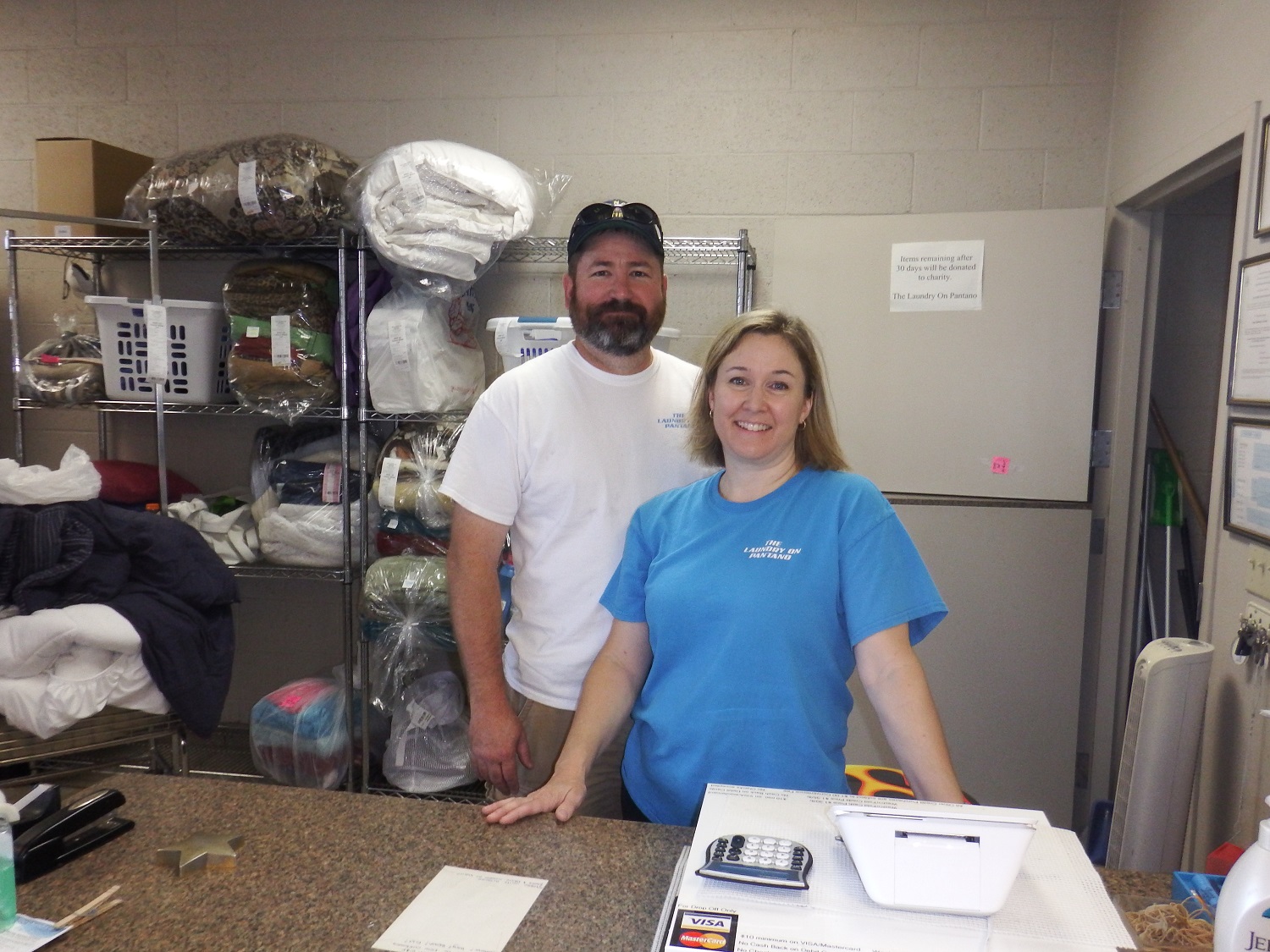 Stephen and Victoria (Steve and Vicky) have lived in Tucson since 2006, as well as from 1998-2004, and prior to enlisting in the Navy after high school, Steve grew up in the Old Pueblo where he graduated from CDO high school in 1988. Vicky grew up in the Northeast – New Hampshire to be exact, but moved around with Steve after marrying in 1992, and have since settled here to raise their two children. We have always had a passion to own our own business and to also help others. Laundromat ownership has helped us fulfill this passion.

Thank you for visiting our site and our laundromats. We hope you will come say hi and introduce yourselves if you ever see us servicing our stores. As always, thank you for your patronage. We hope to see you many more times, and we hope you let your neighbors know that this is a great place to get your laundry needs done, whether you use our self-service option or our full-service option, we thank you.

Although there are many advantages to owning a self-service laundry, one of the most common reasons would-be entrepreneurs seem to favor opening laundromats over other small-business ventures is, in a word, flexibility – the flexibility to set their own hours, the ability to attend their children’s school activities and sporting events, and the opportunity to follows their passions and callings.

For Stephen and Victoria Dotson, the owners of The Laundry on Pantano in Tucson, AZ, and now most recently Tucson Laundry Centers on Swan, it was the ability to continue to follow their passion for helping others.

Stephen had spent a number of years in the U.S. Navy, retiring after 23 years of service, and now works part-time as a nurse with the Department of Veterans Affairs locally in Tucson. Victoria also works in the healthcare industry; she is a perfusionist, which is a specialized healthcare professional who uses the heart-lung machine during cardiac surgery and other procedures that require cardiopulmonary bypass, and also works full time at a local hospital in Tucson. She also helps students studying perfusion at the UA hone their skills in the OR and in simulations.

While owning a laundry is the couple’s first foray into business ownership, it definitely fits with their calling of being of service to others.

Victoria admitted that getting into the laundry business in the first place was mainly Stephen’s idea. “He did his research and, because we both had jobs, he didn’t want something that we would be tied to,” Victoria explained. “He spoke with some business owners and people he knew and found that many of them got their start with a laundry business. He found that you didn’t need to be 100% on premises with a laundromat, since there isn’t a lot of product to care for. We would still have the flexibility to continue in our work while running a rather self-sufficient business, with the help of a pleasant and helpful staff.” Having done their research and becoming comfortable with the idea of owning a laundry, the Dotson’s began their search for an existing store. Eventually, they found one they liked – The Laundry on Pantano –and the entrepreneurial couple has now been in the laundry business for five years. Recently, they’ve added to their investment with the purchase of a new store, Tucson Laundry Centers on Swan and have worked tirelessly, investing into brand new equipment at that store. “Both were large investments,” Victoria said, “probably a bit larger than most people think.” The entire process at our first location took approximately four to six months, to research and secure funding, but that’s not to say all was perfect from the get-go. The same can be said for their second laundromat. They originally passed on the idea, but an opportunity arose that Stephen could not pass up. The second location TLC on Swan has been a work in progress since March 2018, and is nearly complete, after many long nights.

One way the Dotson’s have been able to differentiate their business from the other laundromats in the marketplace has been to offer a refund on loyalty cards. At The Laundry on Pantano, the self-service option is all cash and runs on a smart card technology, “We are a card-operated store, and we offer a refund on those cards, which is very unusual,” Victoria noted. “It actually works out well,” she continued. “We charge a deposit on the smart chip card, which can cost us as a business a significant amount of money, but by ‘buying’ them back from our customers, we can recycle them and have a decreased need to buy new cards more often.” “Of course, we hope our customers keep their cards in their wallets for the next time they visit, but we will buy them back as well as refunding the amount of money that remains on the card”. In our minds “It’s kind of a win-win.” For our full-service customer convenience, we accept credit cards for their payment.

The second store was previously a coin operated only store and the Dotson’s have maintained that form of payment with all the new machinery that has been installed. The full service option at TLC on Swan also offers payment by credit card. Both stores maintain an attendant at all hours of operation, and they both also offer a full service drop off option to their customers. Both stores offer all size machines, but our largest and newest equipment is at Tucson Laundry Centers on Swan. All forms of commercial accounts are taken into consideration so give them a call if you have a need for laundry services, up to and including drop off and pick up.

The Laundry on Pantano (soon to be rebranded to Tucson Laundry Centers on Pantano) is a 2,400-square-foot laundry – which is open from 7am to 10pm seven days a week with a last wash in by 8:30pm and a last drop off or pick up for full service by 9:00pm. LOP features free Wi-Fi access and complimentary coffee in the am, to go along with its beverage and snack vending options. Machine sizes from top loaders to 5 loaders. The fully attended store employs 4 attendants and 1 delivery person.
Tucson Laundry Centers on Swan is nearly a 2,000 square foot facility with machine sizes from top loaders to 8 loads in one machine! It is also fully attended with the same hours of 7am-10pm with last wash in by 8:30pm and last drop off and pick up by 9pm for full service. There is free Wi-Fi and will soon have a vending beverage machine available. There is a change machine on premises to turn those bills up to a $20 bill into quarters. TLC also employs 4 attendants with nearly 40 years of combined laundry experience!

There likely will be more small-business ventures in the Dotson’s future. “My husband would like to own two or three more laundromats,” Victoria said. “He’s also very interested in owning a bar and maybe even an ice cream store – after all, it is Tucson, so it gets hot.” Whatever they try next, the Dotson’s enthusiasm and desire to serve others will no doubt lead them to even further business success.